I've been asked a lot about this phrase. What does "fearing the Lord" mean? If the Lord is good and loving as we've been told, why are we to "fear" God? Doesn't this speak of an angry, smiting God, something characterized by preachers of long ago who preached about hellfire and brimstone? How do fear and love occupy the same space for God?

Throughout our Scriptures, we come across this decree, this foundation of wisdom..."fear the Lord." The ancient Egyptians had no "fear of the Lord" (Exodus 9) and so God delivered the Israelites through plagues and pestilence to a land where they could "fear the Lord." God required the Israelites to fear him and walk in his ways as they entered their new land full of new possibilities and with a future only God had created for them (Deuteronomy 10).

I've come up with answers for this phrase that revolve around, "Well, you ought to respect the majesty and sovereignty of God. You ought to never make God too small, or treat God too lightly. You ought not to take God for granted, and never take your sin for granted as well. God is our friend, and Jesus is our brother; but we never treat this casually as we do our friends and brothers."

I've never been satisfied with these answers. For me, it has always seemed that something is lacking. That this didn't quite explain what this particular "fear" meant. I centered my definition of fear based on God's "Bigness" and our "Smallness".

Here's a better answer that I ran across today. From Proverbs 8:13, we hear, "The fear of the Lord is the hatred of evil." I like this answer much better because it centers on God's loving action to eradicate all evil from the world and his call to us to participate with him so that we can live well in the land/life God gives to us.

God is good and hates all evil. All the actions of God in our scriptures culminating with the sending of Jesus are God's way of dealing with evil in this world. As a redeemed person, one who has been brought out of slavery (either physical as the Israelites' release, or spiritual as our release from sin), our "fear" of God is to participate in God's dealing with evil in this world through the power of the Holy Spirit. We fear God by hating evil and working against it, no matter where it may be found, no matter how big it is.

Evil is not, as the Hollywood films would give us, that ugly monster that lurks in the shadows ready to cut us through with an axe. Evil is anything that would oppose God's will. Loving the Lord is fearing the Lord is hating evil.

Don't go outside on July 22 ... unless you want to encounter pestilence, terror, and war. Why?

Because there's going to be a solar eclipse, and we all know what happens when the moon covers the sun for several moments ... we who use satellite tv might encounter a brief interruption in service and some might call it an early day because it's dark outside.

Seriously, folks on the other side of the world who will have better seats than us are worried about the implications of the solar eclipse. Check out this story on Yahoo! about how folks from certain religions are interpreting this latest move by Mother Nature.

This is an interesting case study of how religion, science, and life play together. I could call this reaction to the "swallowing up of the sun" for a few moments as something that stems from a pre-scientific worldview. There is a belief that unseen gods are playing with the elements of nature, and this latest play is one that has disastrous aftereffects for us humans. It would be easy to call this pre-scientific. In fact, this looks more like superstition - basing behavior on irrationalistic belief. Some may call this even a religious worldview. After all, the belief is stemming from a major religious system of thought.

Science shows us that the simple rotational patterns of us, the moon, and the sun are simply lining up for this unique event to occur. It's nothing more than patterns within Nature where we find ourselves. Nothing more. And so it's foolish to associate world disorder with what is a beautiful, unique, predictable event. This is a scientific worldview, and it helps alleviate our fears. So, go ahead and have your baby on July 22 -- there's nothing to say that this day will create more birth defects than any other day.

But could there be something more to this? In the pre-scientific worldview, we see assignment of Cause. The Effect is the eclipse, but who causes it? In these certain religions, it's the gods of those religions. In Science, the effect is caused by patterns in nature. But who causes it? Science can only postulate here. 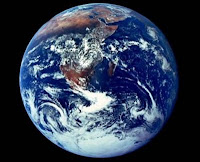 Our Bible has some interesting ideas about nature and how it works. The Ancients believed in a big Dome that covered the sky. God could open certain windows in this Dome and let in the elements -- rain, sun, snow, clouds, wind. We see the Dome a little differently now, especially after our voyages to space where we can see it quite clearly.

But the Ancients had the Cause right -- it was God who created and God who acted in the world. The How was a little off, but the Who was right on.

I guess if I were to run across someone a little superstitious about July 22 and solar eclipses caused by gods, I wouldn't necessarily be led to dismiss them right off for being naive about the ways our world works. They may have gotten the How wrong, but they're close on the Who. And that's a starting point to take us to the True Who of all Creation--the one true God of the Universe.

Psalm 89:6 "For who in the skies above can compare with the LORD ?
Who is like the LORD among the heavenly beings?
(v.11) The heavens are yours, and yours also the earth;
you founded the world and all that is in it."

Check out the rest of the Psalm, here.

Social thinking is changing these days. Words like "sustainability," "green," and "local/organic" are becoming more and more of our vocabulary. Slowly, change is happening.

The calls to treat our environment differently come from many corners...from genuinely concerned people, self-promoters, and even my local Market Street store (buy a green, reusable shopping bag and get 5 cents per bag off your total purchase). Behind all the alarms to treat our environment differently, I hear a basic word from God calling us back to our God-given work as humans -- to steward the environment (Genesis 1 and 2). God has placed us in charge of what surrounds us. And God gives us the freedom to determine how to use/steward what we have. Because God is love, God also turns us over to the consequences of our stewardship. Because we're such poor stewards in the end, God comes to rescue us in Jesus and set us right again.

We have a chance to change our direction for the good. Some are leading the charge, others are waiting to see how this shapes up (I'm more in this camp), and others are just going to wait until they absolutely have to join us in a redeemed stewardship. Here's a link to a little video that gets you thinking about where all the stuff we use/consume comes from and the hidden cost of our consumption. The story of stuff...

My thoughts about the video -- it's fast, fact-filled, sometimes too simplistic in its estimations, but it gets the job done of revealing what is at stake currently.

And if you've ever wondered about where your keyboard ends up when you throw it out...check out this Time article, here.

Getting back into the swing of things...

It's been a while since I posted. I've probably lost all of my audience (except for my faithful mother....hi mom!). I'm going to get back into the swing of things since I'm experiencing a resurgence of ideas, I'm being linked to by an awesome new blog, and I'm throwing my hat into the twitter game. (you can follow me @ twitter. i'm "patimu").

Here's the shout out to the new blog started by our overly qualified, sorely underpaid minister for Youth and Family at PMLC -- Jerry Watts. Follow his latest entries on living with a changing youth ministry environment, here. There's some other links to great folks on his blogsite as well. Jerry is best understood with a large cup of coffee in your hand. He would prefer it.

I'll be back later...I'm gonna figure out how to get the twitter updates and such. It's all so foreign to me...I just don't think in 1's and 0's for this technology stuff. But, it should all be fun.

Tribes ... by Seth Godin
Leadership in the Age of the Quick Fix ... by Ed Friedman
A James Patterson Book (they change so quickly, it's hard to keep up!)